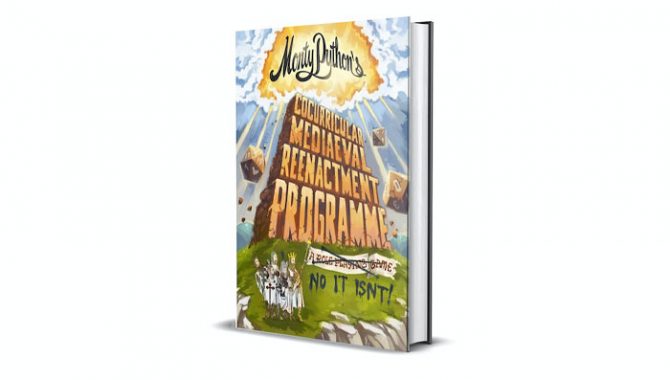 Guys, it’s great to catch up. Matt, before we dive into the wonderfully named Monty Python’s Cocurricular Mediaeval Reenactment Programme, can you give us a bit of background to Exalted Funeral?
Matt Kelley, Founder, Exalted Funeral: Exalted Funeral is a small, independent tabletop RPG producer and we focus on the independent spirit of gaming.

Was working on a licensed game something new?
MK: It was semi-new. It came in conjunction with another licensed project – Dr Grordbort’s with Wētā Workshop – so we’ve kind of torpedoed into that realm quickly. We’ve gone all guns blazing! Before that, we worked exclusively with new creator-led IP.

Great. Brian, let’s bring you in. For anyone new to Crowbar Creative, talk us through what you guys do?
Brian Saliba, Founder, Crowbar Creative: Crowbar Creative is a game design studio. It’s mainly me but I work with collaborators on different projects, including this one. Before Crowbar Creative, I was in publishing for a long time. I worked as an editor for Penguin and DK Publishing in New York and London, and then at a non-profit, but I had some licensing experience back in my time at DK.

Last year saw you guys take your official Monty Python RPG to Kickstarter, where it raised a whopping $1.9m from a $20,000 goal, thanks to the support of over 15,000 backers. For anyone yet to see the game, how would you describe it?
BS: Monty Python’s Cocurricular Mediaeval Reenactment Programme is a role-playing game that draws on Monty Python’s entire back-catalogue of work. The TV shows, the movies, the books, the albums… We’ve attempted to bring it all into one toolbox that RPG enthusiasts can use to create interesting experiences at the table.

When most people see it, they assume it’s a Holy Grail RPG. For us, that was never of interest – it felt like low hanging fruit. That also wasn’t of interest to the licensor. They were interested in how all of their work could be reflected in the game. 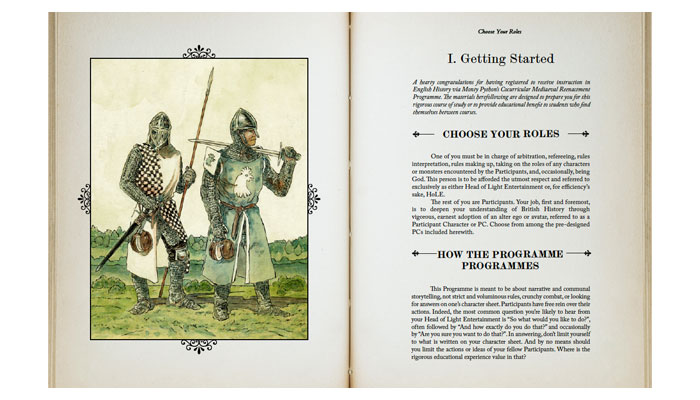 So with all of Python’s work to wrestle with, where is the game set?
BS: It’s set in Mediaeval England, and you’re knights and squires and peasants on a quest – so it might appear at first to be a Holy Grail game! That said, very quickly farce, surrealism and non-sequiturs begin intruding in the game in weird ways. You might suddenly end up in a 1970s TV studio, or a house in East London where a couple of pepperpots are watching the TV. All these things start to intrude into the ‘traditional role-playing game’, and there’s lots of fourth wall breaking. Playing the game feels like you’re in the middle of an episode of Monty Python’s Flying Circus. It’s hopefully a really fun, creative experience.

It sounds very mad and very funny.
BS: It is, but it’s also not intended to be your typical comedy RPG. In role-playing games, when you try to force comedy into something, it doesn’t tend to work out very well. Our intention was to make an authentically Monty Python RPG. There’s no pressure on the person running the game to be funny. It’s much more about being creative, letting things unfold and things will happen that might be funny – and that could be very slapstick or something more surreal. 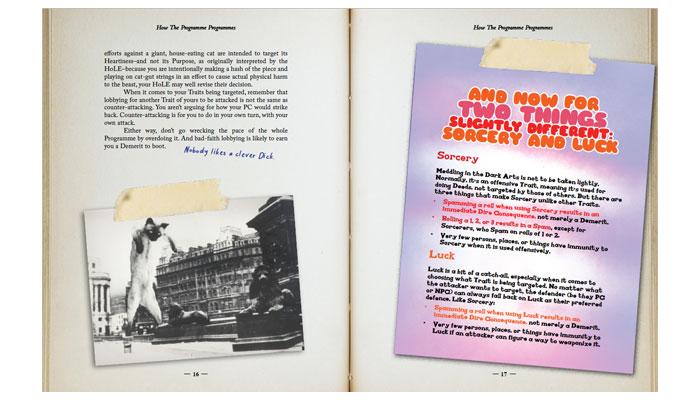 How did this all come about? How did you connect with the Monty Python management?
BS: The conversation began with Bravado. They primarily look after licensed products for big bands. I was talking to them for a long time about a licensed RPG for a band. We got quite far down the road with that, but it didn’t work out. We’d put a lot into the concept and as a consolation, they sent me their client list and said “If you have ideas for our other brands, just reach out.”

I saw Monty Python on that list, got back in touch with Bravado and they felt it was a great choice as they were looking for opportunities to get Monty Python in-front of a younger audience. That led to 18 months of conversations back and forth, and some of that was educating them about RPGs and why we would choose to crowdfund it. We had to convince several layers about why this was viable. And rightly so – it was a lot of content to approve! It’s not just an image on a sweatshirt!

MK: It’s a very curated brand and it’s well looked after. The licensor wanted to make sure it was tonally correct – and I have to give kudos to the Crowbar team because they ensured this came across as authentically Python. When Brian first reached out to us with the idea, he had an amazing presentation and it got us hooked.

Monty Python remains something of a sleeping giant in licensing because it’s tough to get that authenticity right. Not everyone can do it. It’s easier to do something that just relies on the quotes from the movies instead of creating something fresh for this brand and the Python world. That didn’t interest the licensor; they wanted an authentic Python experience, and so did we.

BS: It was reassuring that management really cared about this. They didn’t want the game to just replicate scenes that everyone knows; they wanted something new. Those are the kinds of conversations you love to have as a licensee, because it shows the licensor cares about their brand. 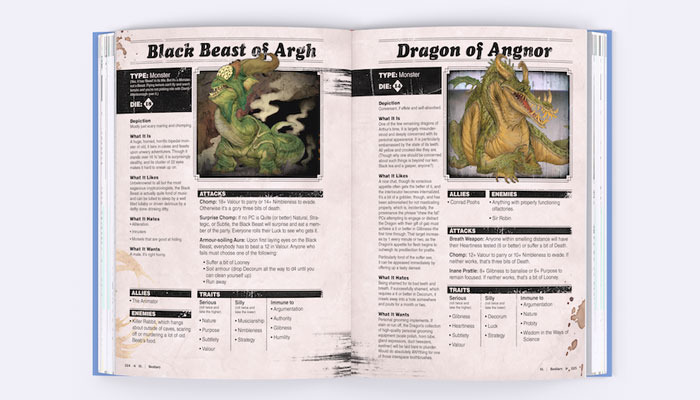 Monty Python feels like quite a slippery brand in many ways. It’s very self-aware, playful and anarchic… How did you get to grips with its tone? Was it tricky?
BS: Terry Jones once said “The fact that ‘Pythonesque’ is listed in the Oxford English Dictionary is a testament to how we’ve completely failed at everything’. And even within the group themselves, they had different ideas around what they were trying to do. Terry Gilliam has said that it was about making people think, while Terry Jones seemed to think it was more about being unpredictable. These are five brilliant guys who each had very different sensibilities, but it all meshed to create something weird and magical.

When it comes to comedy, the more you parse it, the less interesting it gets – so our process for capturing the tone was just to dive into the content. We watched things and read everything we could to get a sense of what the hallmarks are.

And what would you say they are?
BS: Farce, surrealism, physical comedy, subversive comedy, wordplay… We would look at every character on screen and think about how they could translate into a role-playing game. What would Sir Galahad or Dinsdale Piranha be like in a role-playing game? The characters were all well-defined, even if they’re a one-note character, so populating the world wasn’t difficult.

The more difficult part was figuring out how to simulate some of the self-referential stuff and the surrealism. That’s when we came up with the idea that this isn’t a role-playing game, it’s a re-enactment programme. It’s an educational supplement for students of English history. That gave us one layer to play with.

Then we built an additional layer on that… For the person running the game, yes, this programme gives your students a way to learn about history – but, it also serves as a way to prepare the teacher to leave education to pursue a stimulating and lucrative career in television programming.

Ha! Right.
BS: In our game, the gamemaster is actually called ‘The Head of Light Entertainment’. The gag is that the history curriculum adopts the conventions of television to further engage the vacuous youth of today. Those two layers allowed for all sorts of weird things to happen, like a modern studio audience suddenly revolts and runs into the scene to trash the castle.

Sounds like you needed to build some walls into the game so that players could break them down.
BS: Exactly. You need to have a fourth wall if you want to break the fourth wall!

And I think the title – Monty Python’s Cocurricular Mediaeval Reenactment Programme – does a great job of reassuring fans that you’ve got the tone spot on.
MK: The title confirmed to me that Brian and his brother had a grip on Python tonally, but it was also one of our first big hurdles. Everybody said “You can’t have this title. No-one can say it. No-one can spell it. It’s too long. It doesn’t say RPG.”

MK: I dug my heels in as the publisher because this title shows the fans that we understand this brand. If you check out the free quickstart, you’ll see how it really drops you into the world. It’s not just some familiar King Arthur jokes. You’re truly immersed in the world of Monty Python, and the writing is brilliant. 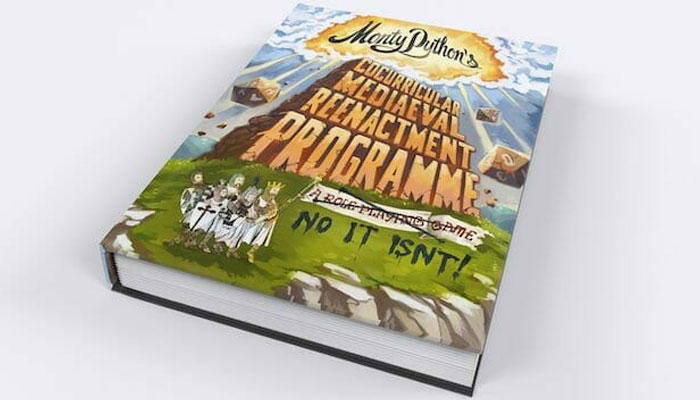 We’ll put a link into the quickstart here so people can check that out.
BS: I wanted to quickly say, thank goodness we had a publisher that got it. I couldn’t imagine what a traditional publisher might’ve thought of our title! They’d have called it ‘The Monty Python RPG’.

With all of these decisions, it always came down to one of two things. Did it make you laugh? And did it make you say ‘Oh, that’s so Python.’ The title did both.

Another example is that we did a giveaway where anyone that backed the Kickstarter in the first two days got a sash that has ‘Head of Light Entertainment’ on it. We had lots of ideas for different giveaways, and for more traditional RPG giveaways, but the sash just made us laugh. It’s so ridiculous. It hits a note in the same way as the title.

Was there a moment when you knew you’d nailed it tonally?
BS: A gratifying moment for us was that we’d always pitched this as ‘the’ Monty Python Cocurricular Mediaeval Reenactment Programme. We felt it would be presumptuous and overstepping to call it ‘Monty Python’s’. It was actually the licensor that told us to make it possessive and change it to Monty Python’s Cocurricular Mediaeval Reenactment Programme. It’s a subtle thing but that was such a magical moment for us.

A lovely note to wrap up on. Thanks again guys. 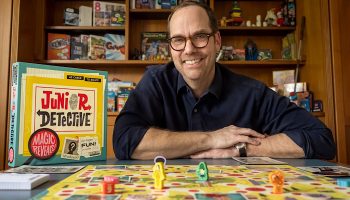 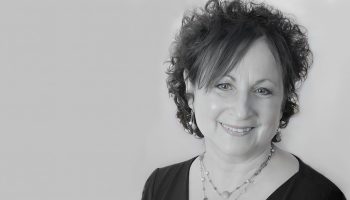 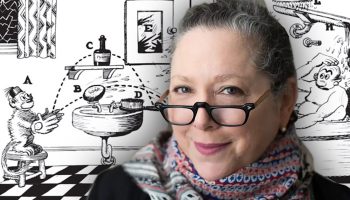 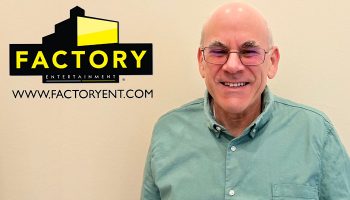 Jordan Schwartz, founder of Factory Entertainment, on why creating prop replicas is in their DNA 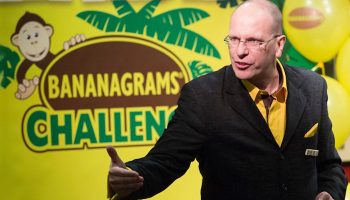 Extending brand tone into books: Little Book of Bananagrams author, Deej Johnson, on getting it right 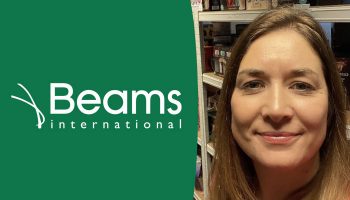