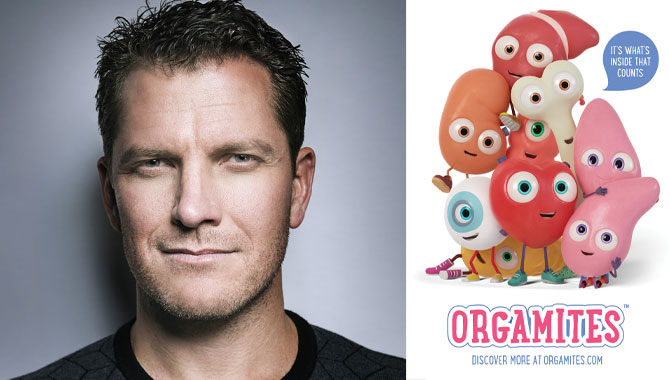 We caught up with Roydon to find out more about the origins of the Orgamites, and why licensing makes sense as the next step for the brand.

Roydon Turner is looking to change the way people of all ages view organ donation.

Instead of organ donation being an unspoken topic, Roydon is trying to get families to have conversations about the issue through his new brand: the Orgamites.

Having already been endorsed by the likes of NHS Blood and the European Society for Organ Transplantation, Roydon is now looking to evolve the Orgamites brand through licensing, with an eye on partnerships in toys, publishing and TV.

We caught up with Roydon to find out more about the origins of the Orgamites, and why licensing makes sense as the next step for the brand. 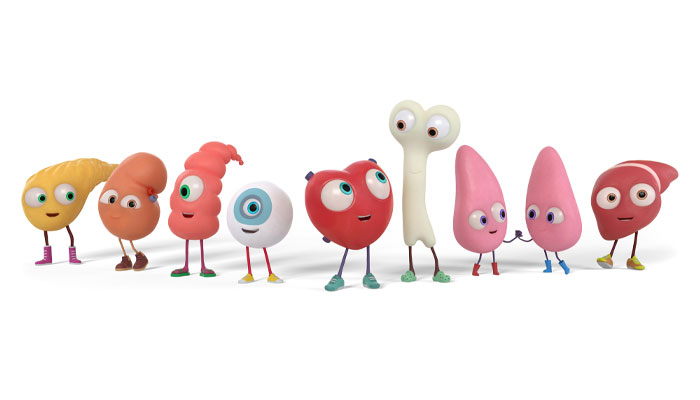 Hi Roydon; it’s great to connect. So, let’s dive straight in. Your brand – the Orgamites – is all about enabling positive, empowering conversations between kids and adults about organ donation. I fear I’ve already made it sound very ‘worthy’, but I should stress that it has a real personality and a genuine sense of fun! Before we dive in, what should people know about the Orgamites?
The Orgamites are a team of animated organs that represent the most-donated parts of the body. These lovable characters help kids to connect with and appreciate the roles of their organs, whilst learning what organ donation is all about as well as how to take better care of their health, each other and the world.

Talk us through where this all came from?
I was initially approached by a charity called – Live Life Give Life – to work on a project around organ donation, aimed at adults. At the time, organ donation campaigns were focused on saving individuals – John needs a heart and if we don’t save John, he will die.

My writing partner – Jamie Thomson – and I turned that around and focused on the wider circle. So instead of trying to save John, we wanted to alert people to the number of people in John’s world that will be left behind – families, friends, colleagues.

So the idea was to follow a couple in love, you see their highs and lows, and at the end, the guy takes his shirt off and you realise he has someone else’s heart. The campaign did incredibly well.

Thanks! And I have a close connection anyway to organ donation because of my brother.  He contracted Encephalitis when he was just five weeks old and passed away at the age of 12. No one at the time thought to ask my parents about donating his organs. I’ve since felt we would have healed stronger and quicker if Bradley’s sad passing had perhaps had some positive outcome – if for instance, via organ donation, his death had saved another child’s life.

So it was a mix of your personal experience and then your work on that campaign that led to Orgamites?
Well, while I was working on that campaign the charity asked if I could meet with a family, the Lewis family. I met with them in a coffee shop, and they wanted me to help their young boy James find a heart. I’ve worked in advertising for years, but this was the most difficult brief I’d ever received. How does one find a heart?

It really appealed to me because of the link back to my brother, and I thought I knew a lot about organ donation through working on the previous campaign, but it turns out I didn’t. The law in England has changed, so all adults in England are now considered to have agreed to be an organ donor when they die unless they have recorded a decision not to donate or are in one of the excluded groups.

So what should people know about organ donation that you feel maybe they don’t?
Around 40% of people still say no to organ donation because they don’t know their loved ones’ choices – and their loved ones can even overrule their wishes. So although you may be on the organ donation register, your partner can still – when you’re in a capacity where you cannot speak – overrule your choice, if they weren’t sure what you wanted. The only way to prevent that is for you to make your decision clear to your family long beforehand.

We need to get people talking about organ donation, and that’s what the Orgamites are all about. They’re here to enable conversations between kids and parents. 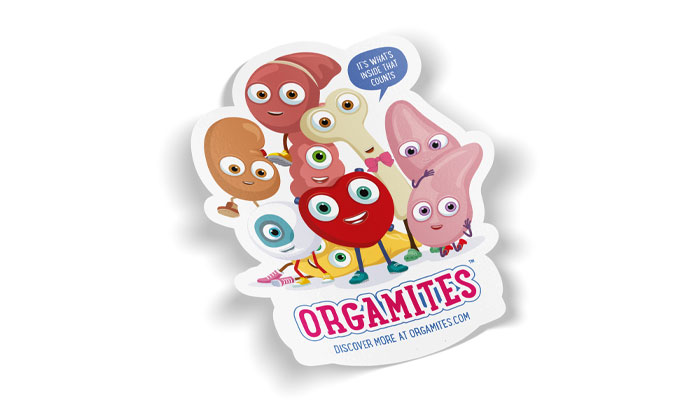 It’s a question I think I know the answer to, but I’ll ask it anyway – why don’t parents want to talk to kids about organ donation?
No-one likes to talk about death. It’s the same – or perhaps even worse – than the birds and the bees conversation. No-one likes to talk about sex or death. Least of all with their kids or parents. Who better than to start this kind of conversation, than the organs themselves?

How did the idea develop into what you have now?
I was introduced to Matt Latchford, who was a freelance artist for Mind Candy at the time, and he did some initial designs for me that were beautiful. The idea resonated with him, and as soon as I saw Matt’s designs, I knew there was something there.

Back when I did some work for Johnson & Johnson, I met – Antonio Balseiro – who runs a commercial production studio out of Buenos Aires in Argentina. Antonio introduced me to his younger brother – Carlos Balseiro – who runs his own studio… Talent runs deep in this family! I worked with Carlos to move them on to the 3D characters they are today, making them truly unique personalities with their own special quirks.

Are you making anything now?
Yes. I’m currently making four new films for the Onassis Foundation. They have developed a new transplant hospital in Greece and want to extend their educational part of the programme with the Orgamites.

The partnership with the Onassis Foundation has really given the brand validation in the international space, and in addition, we’re endorsed by NHS Blood and Transplant, Organ Donation Scotland and the European Society for Organ Transplantation. Three weeks ago, I got a call from Canada Blood and Transplant, so we now have them signed on to use the Orgamites too.

That’s great! So what are you looking to do with the brand when it comes to consumer products?
I’m looking for partners that are ethically and morally responsible. I also want to partner with a toy company or a board game firm to bring the Orgamites to life in that industry. Imagine if we could team up with Hasbro on a riff on Operation called ‘Transplantation’ with the Orgamites characters! It could really help bring about important conversations that are far too often left until it’s simply too late.

There are also possibilities to do some quite innovative, impactful things. Think about collectibles. Today there’s approximately 195 children waiting for an organ transplant in the UK, around 40 of these children are waiting for a heart. If you make the collectibles limited to roughly the same number as kids currently waiting in the world, you can make a point and create a story around the toys. 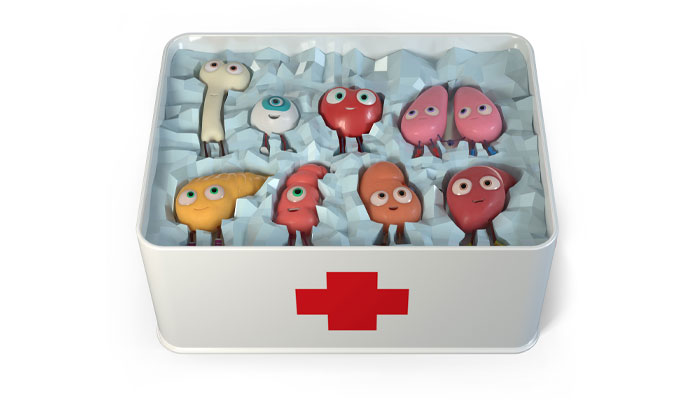 Same with video games – what if when your character dies, you have an option to donate their organs, and that unlocks points or special in-game items. It’s all about being creative.

The characters themselves are really fun – talk us through the design behind them.
We wanted the characters to be endearing, fun and to have the whizz-bang of things like Paw Patrol. We started with the vital organs, that made sense. These are the things that keep us alive and make a difference to our lives.

Through interviews with kids, we found the gorier it is, the more kids love it! But we had to appeal to parents too, so there was some trial and error with regards to how far we could push it. We also had to make sure that the characters and their shapes were instantly recognisable and could translate into other products.

And only the lungs have arms…
Yes! That was the most contentious thing – arms or no arms! I took the decision for most of them not to have hands for two reasons. One, I wanted the characters to depend on each other and this vulnerability makes you feel like they need help. A subliminal message that they can’t survive in the world without the help of children. Secondly, I didn’t want it to be creepy in the sense that organs could climb out of the body by using their hands!

The lungs have hands because they need to be connected, but they each only have one arm. So that was the logic there. 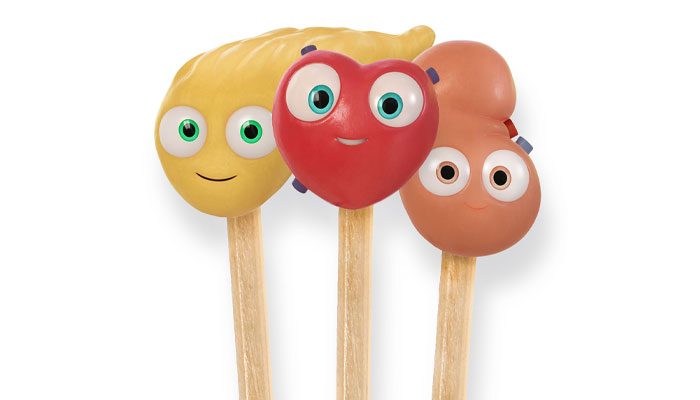 Looking at consumer product possibilities, what sort of toy partner would you be looking for?
I think the Orgamites could reach lots of different parts of the toy world. For example, I think they could work as an edition of Dobble.

I don’t have one company in mind, I would just welcome any company that recognised that Orgamites is an international brand with a purpose. If bigger companies want to do more when it comes to charitable initiatives or doing more for the environment, then this is a great opportunity for them to launch a range that can really make a difference. How many toys can lay claim to be saving lives?

One other point would be that everyone knows about recycling, and information around that is on toy packaging – but no-one is really talking, yet, about lifecycling (organ donation). Just adding a message on packaging about how a toy is helping provoke conversations around organ donation could help create a shift in thinking.

Ultimately, it’s all about having a conversation, and toys really can help to break down the taboos and make having that conversation less scary. 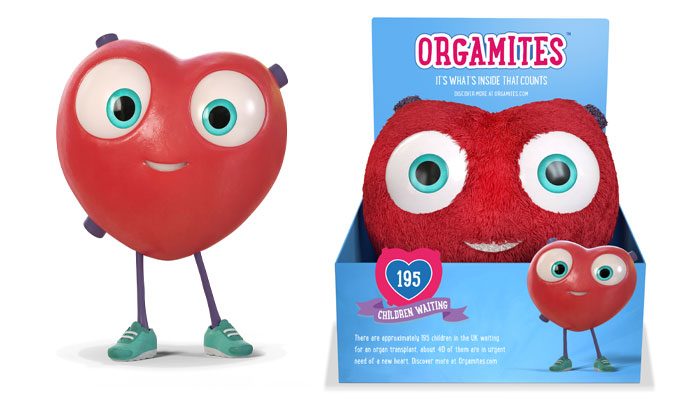 Away from toys, what other categories of interest on the agenda for the Orgamites?
The broadcast sector is an interesting one. There’s huge potential for a TV series – who better than to talk about health and wellbeing in a fun and entertaining way than organs! And that’s the key – it would be fun and entertaining, not patronising or gross.

Publishing is also of interest, because no-one is covering this area in this way. I think when it comes to licensing, the sky’s the limit.

Before I let you go, how can people reach out if they’d like to talk to you about the Orgamites?
They can email me at roydon@awesonova.com. Discover more at: www.Orgamites.com.

Brill – well thanks again Roydon, and congrats on everything you’ve done with Orgamites to date. I look forward to seeing the brand grow in consumer products!

To stay in the loop with the latest news, interviews and features from the world of toy and game design, sign up to our weekly newsletter here 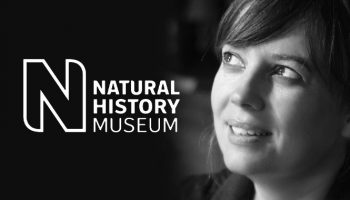 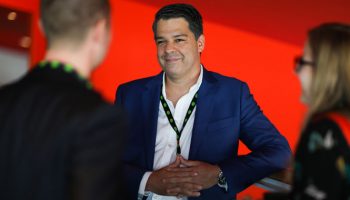 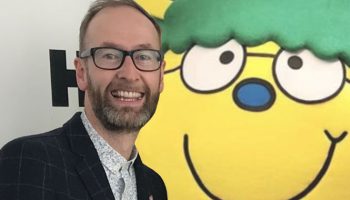 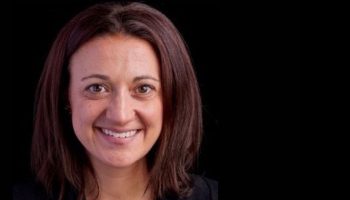 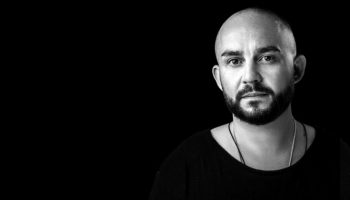 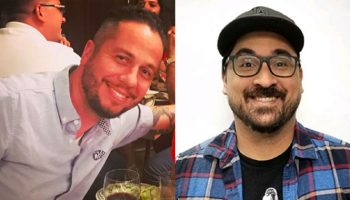 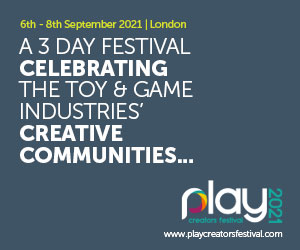 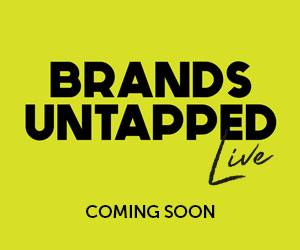