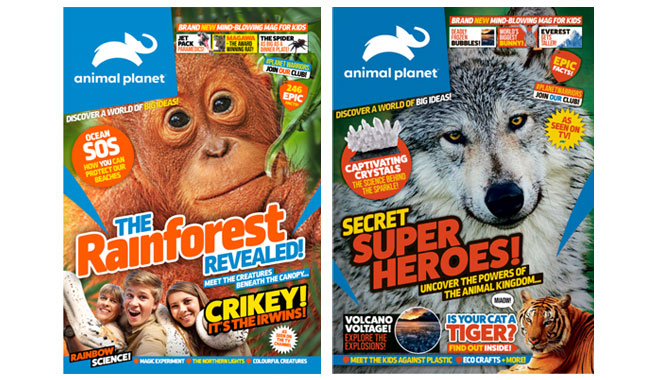 The children’s comic and magazine market is a buoyant one, but it’s also crowded and competitive. The fixture in most retailers is packed full of titles – including many licensed ones.

Licensing plays a strong role in the market with well-known characters such as Peppa Pig, Paddington and Paw Patrol having their own standalone titles, while there’s also a number of compilation titles that feature multiple characters. Specialist publishers in the category – like Redan – have created their own brands, such as Fun to Learn, which they badge their licensed offerings with.

It’s a tough market to operate in and seems to be getting tougher to launch into. Against this background, it’s always worth noting a new launch. DC Thomson, the owners of The Beano, recently announced a new partnership with Discovery Inc to launch an Animal Planet magazine. 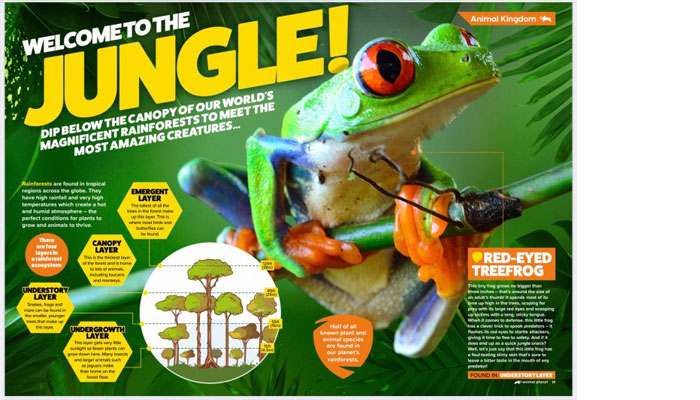 DC Thomson are no strangers to licensed titles – they are the publishers on the long-running official Jacqueline Wilson magazine. They also have form with animals, having enjoyed long term success with their own title Animals and You magazine.

TV channels working with publishers to create children’s comics and magazines is not a new thing. In my own experience, some 20 years ago whilst working at Fox Kids we developed seven or eight Fox Kids titles around Europe – including a compilation comic in the UK WickID and a glossy lifestyle magazine in the Netherlands.

For TV channels, working with publishers is a way of giving their brand an off-screen life and provides a showcase for content. Subjects can be explored in different ways, specific strands dialled up and there’s scope to develop the personality of presenters in more depth.

Charlotte Payne, International Marketing and Strategy Director at Discovery Inc, commented on the magazine’s release: “For me, the collaboration with DC Thomson Media is going to enable us to bring the Animal Planet brand to life beyond the screen, inspiring children of all ages to experience the wonder and joy of the animal kingdom, all while maintaining sustainability through the magazine’s printing and packaging.” 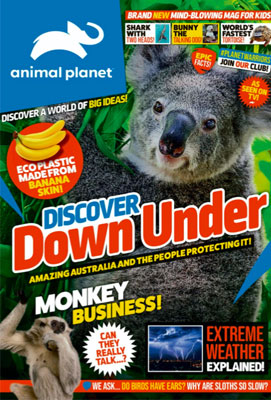 The Animal Planet magazine has been developed with seven to 12 year olds in mind. Apparently, it has been over a year in planning and development.

Publishers will spend a lot of time looking at the marketplace evaluating where their new title will fit. There will also be consumer research undertaken to get the editorial mix and balance right. Of course, in a licensing partnership, the publisher has to work closely with the rightsholder and take on board their input regarding content, style and tone.

Animal Planet magazine includes the #PlanetWarriors Club which is exclusive to the magazine and creates a mechanic for readers to get involved with the title, including sending in their own content. Magazines are competing with social media and online content these days so creating a facility to build a relationship with readers and to get them involved in the title seems sensible.

The magazine also features a number of well-known names from the natural history world in Dr Jess French, Michaela Strachan, Ben Fogle and Ellie Harrison. They form an ‘expert panel’ who answer questions from readers. Again, this adds to the sense of community in the title and using experts underpins the credibility of the editorial. 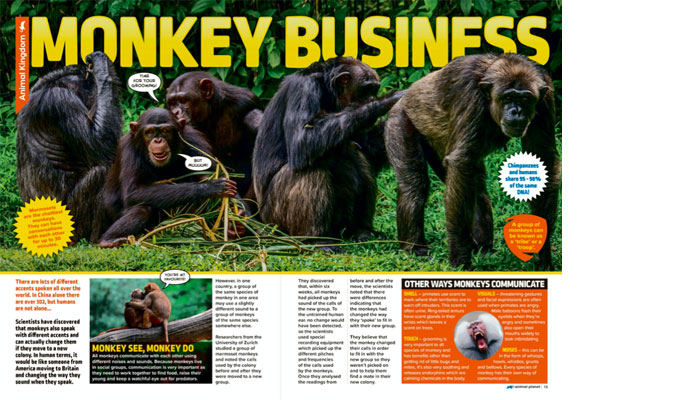 The magazine is bright, glossy and full colour throughout. It has a premium feel to it and is content-rich. It is priced at £3.99 and seems to represent value for money. Editorially, it’s packed with information and boasts a number of interactive features, like a puzzle page. Elsewhere, a few comic strip stories add some variety to it while pull out posters add to the perceived value of the title.

Recently there has been some debate over magazine covermounts in the children’s magazine category. Traditionally a lot of these gifts have been plastic toys. Indeed, Waitrose have instructed all their children’s magazine suppliers to remove such gifts from the titles they supply to the supermarket.

In the case of the Animal Planet magazine, it comes as no surprise that the covermount gifts are non -plastic items as I’m sure Discovery would want to emphasise the sustainable credentials of the title. The paper the magazine is printed on is an FSC accredited mix from responsible sources and the covermounts on the issue I bought were a pack of Viola seeds – which are bee-friendly flowers – and a Build Your Own Bug kit… In this case, an ant.

DC Thomson are also targeting schools with a schools subscription offer. They have given schools the chance to trial a free issue before committing to a subscription. This seems like a smart move. Getting the magazine into schools is of course a worthwhile sale in its own right, but it’s also a great way of reaching a wider audience and allowing them to sample the title.

While there is no doubt that the publication is a good one, there are challenges for children’s magazines beyond the content. In such a competitive space, it’s essential that the title is visible, well distributed and promoted. It would be a shame to see such a strong title falter at the point of sale. I would also assume Discovery are helping promote the title – this should help raise awareness among viewers.

As Maria Welch from DC Thomson said: “DC Thomson Media has a long and successful history in children’s magazine publishing and the team behind this brand-new launch have brought all this passion and expertise to Animal Planet.”

It’s a high-quality publication and one that is a great example of a licensing partnership. I hope it works for both parties. 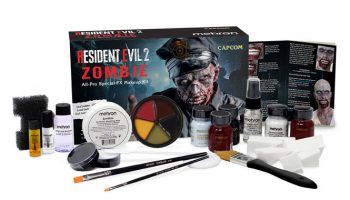 Start Licensing’s Ian Downes chats with Bits and Pixels co-owner Sandra Arcan to discuss the agency, its approach to licensing and how video game brands can thrive in consumer products. 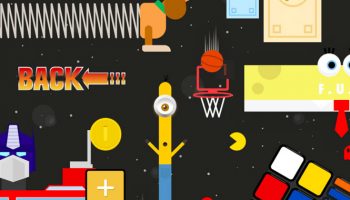 Playing with brands and UI

Si digital’s Head of Design, Tom O’Malley, looks at how brands can immerse fans even further in their IP through smart, creative user interface designs. 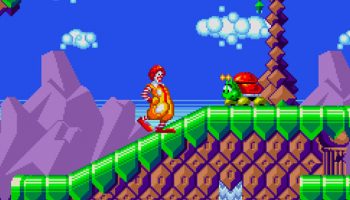 Game designer and author Scott Rogers takes a look at how fast food brands like McDonald’s, KFC and Burger King have embraced the video game space over the years. 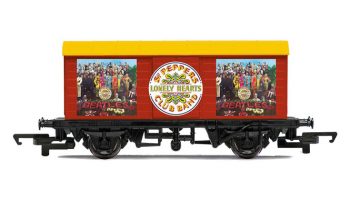 The Brand Radar: Hornby, The Beatles and the flourishing world of band brands

Start Licensing’s Ian Downes looks at band brands, deliving into why the likes of The Beatles, David Bowie and Queen are soaring in sectors spanning toys to socks. 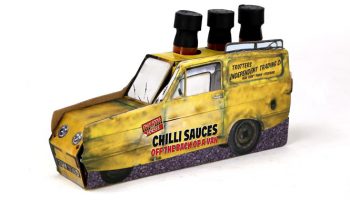 Start Licensing’s Ian Downes looks at how gifting licensee Kimm & Miller is breathing new life into the classic BBC sitcom Only Fools and Horses with a creative Father’s Day range. 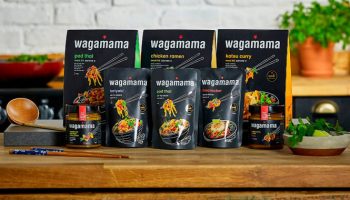 The Brand Radar: Wagamama, Waitrose and how restaurant brands are soaring at retail

Start Licensing’s Ian Downes looks at how restaurant brands like Wagamama, Harry Ramsden’s and Yo! Sushi are embracing the retail space with licensed ready meals, sauces and cooking kits.